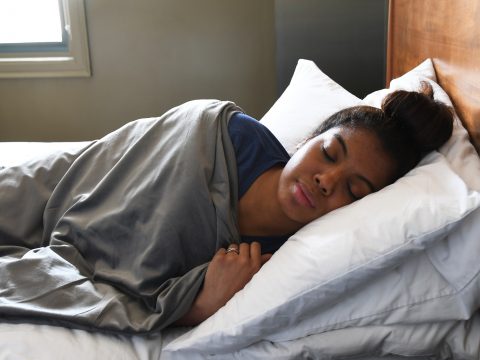 People are more willing to change bedding than to give up caffeine or alcohol to improve sleep.

DUQUESNE, PA – Do you get enough sleep? One in three adults said they do not regularly get 7 hours of sleep per night, according to a new U.S. consumer survey conducted on behalf of Tranquility, America’s No. 1 selling weighted blanket brand.

The American Academy of Sleep Medicine and the Sleep Research Society recommend that adults aged 18 to 60 years sleep at least seven hours each night to promote optimal health and well-being. Getting less than seven hours of sleep per 24-hour day period is known as short sleep duration.

“What’s interesting is that the percentage of Americans not getting enough sleep in the Tranquility survey is about the same as in 2014 when the Centers for Disease Control and Prevention described insufficient sleep as a serious public health issue,” said Patrick Seiffert, with American Textile Company, the makers of Tranquility. “Despite all the health experts telling us to get more sleep, Americans are still having trouble getting a good night’s rest.”

Sleeping less than seven hours per day is associated with an increased risk of developing chronic conditions, such as obesity, diabetes, high blood pressure, heart disease, stroke, and frequent mental distress, according to the CDC and other public health sources.** Lack of sleep also affects people’s focus and attention at work. Nearly one in three respondents reported that insufficient sleep had a negative impact on their work performance and one in four said it made them late for work.

People are seemingly getting the message about the importance of sleep, the survey found. Most adults (88%) believe that quality sleep is critically important to their overall health, and two-thirds take their sleep routines seriously.

Yet the demands of work and family shorten the time for rest. The biggest barrier to getting the recommended amount of sleep, according to the survey, is general stress or anxiety. More women (61%) cited stress as a barrier to quality sleep than men (50%).

“Based on stress levels, it should come as no surprise our survey found that more women (36%) reported regularly not getting seven hours of sleep a night compared to men (30%),” Seiffert said. “And we know the coronavirus pandemic has increased stress levels and led to an increase in behaviors more likely to interfere with sleep routines, like higher consumption of alcohol and more screen time.”

The National Sleep Foundation suggests sticking to the same bedtime and wake-up routine every day, avoiding naps, and doing daily exercise, among other healthy sleep habits. The survey also found that 33 percent of adults would be willing to try changing their bedding to improve their sleep quality, which is three times more than those who said they would give up alcohol.

Tranquility weighted blankets were developed in response to the growing need for solutions to reduce stress and anxiety, as well as to provide a safe, natural way to improve sleep. The top-rated blankets use deep calming pressure to help both adults and children relax and sleep better.

**According to the CDC, Sleep Foundation and numerous peer-reviewed observational studies.

***Based on a survey conducted among 400 U.S. consumer testers in December 2020 by Home Tester Club on behalf of American Textile Company.

Tranquility weighted blankets were developed by American Textile Company in response to growing consumer interest in solutions to reduce stress and anxiety, as well as to provide a safe, natural solution to improve sleep. Launched in 2018, Tranquility is now the No.1 selling weighted blanket brand in the U.S., driven by its quality, value, and availability in traditional and online retailers. Consumers responded to the quality that Tranquility provides – it is consistently rated 4.5 stars or higher across retailers, offering features previously available in weighted blankets at two or three times the price of Tranquility.